Bullying is acting in ways that scare or harm another person. Youths who bully usually pick on someone who appears weaker or isolated, and they repeat the actions over and over. Bullying starts very early, some research says as early as pre-school. However it is most common in middle school. Bullying does decrease in High School, but with the access to multiple media interactions such as social media, and text messaging bullying.


Both boys and girls take part in "cyber-bullying." This means using high-tech devices to spread rumors or to send hurtful messages or pictures. Emotional bullying doesn't leave bruises, but the damage is just as real. 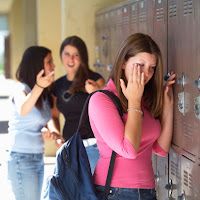 If you think your child is being bullied-or is bullying someone else-take action to stop the abuse.

Why is it important to stop bullying?

Bullying is a serious problem for all children involved. Youths who are bullied are more likely to feel bad about themselves, which can lead to depression.. They may fear or lose interest in going to school. Sometimes they take extreme measures, which can lead to tragic results, including suicide. They may carry weapons, use violence to lash out at the perpetrators of bullying, or try to harm themselves.

Kids who bully others are more likely to drop out of school, have drug and alcohol problems, and break the law.

What are the traits of children who bully?

Children who bully are often physically strong. They may bully because they like the feeling of power. They may be kids who do things without thinking first and may not follow rules. These boys and girls have not learned to think about the feelings of other people.

Kids who physically bully others sometimes come from homes where adults fight or hurt each other. They may pick on other kids because they have been bullied themselves.

Children who bully need counseling. It can help them understand why they act as they do. And it can teach them how to interact with others in more positive ways. Family counseling is especially helpful for these children.

How do children who are bullied act?

Children who are bullied are often quiet and shy. They may have few friends and find it hard to stand up for themselves. They may begin to think that they deserve the abuse.

What can children do if they are bullied?

Children are often scared and angry when they are bullied. They may not know what to do. Teach them to:

What can you do to stop bullying?

Bullying can be stopped if people pay attention and take action.

Bullying most often occurs in school, and it is most common in schools where students are not well supervised. If bullying is happening at your child’s school, talk to the principal or vice principal. Urge the school to adopt a no-bullying policy. All children should know that those who bully will be punished. Children who are bullied should be supported and protected.

As a parent, you can help your child get involved in new hobbies or groups, such as school clubs or church youth groups. Being part of a group can help reduce bullying. Having friends can help a child have a better self-image.

Kids can help keep other kids from being bullied. If you are a kid, don't let yourself be part of the problem.