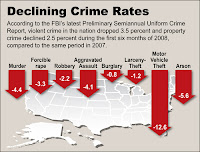 A recent release of a study by the Bureau of Justice Statistics revealed that violent crime rates across the U.S. jumped by about 18%, and property crimes rose by 11% between 2010 and 2011.

According to several experts including Eugene O'Donnell, a professor at the John Jay College of Criminal Justice in New York, there is concern. "It calls into question whether police departments, either subtely or overtly, are discouraging report."