This summer could mark a turning point after decades of violent crime in Atlantic City.
“Timing is everything,” said Perry Mays, a longtime anti-violence advocate. “I think people in the community are fed up. They want to stand up and take their community back.”
Months after two of the city’s allegedly most violent drug gangs were crippled in multiagency raids — dozens of Dirty Blok and 800 Blok gang members were arrested — and a gun buyback program took thousands of guns off the streets, advocates are joining together in a way not seen in Atlantic City and the area. 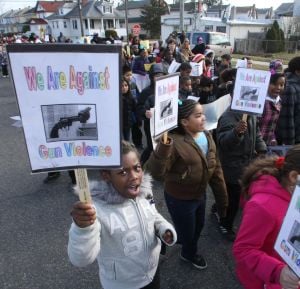 Things have been quieter. Atlantic City has had three homicides this year; there had been a dozen at this time last year. Pleasantville had three in January 2012. This year, none.
“Any time crime is down for a period of months, I’m cautiously optimistic,” says acting Atlantic County Prosecutor Jim McClain.
In 1982, the city saw 20 homicides, the most it’s seen since figures were reliably recorded. Thirty years later, in 2012, 19 people were killed within city limits, including one by police.
A task force of local and state officials has formed to take advantage of a lull in violent crime, although shootings are still regular. The changes in one Atlantic City neighborhood were already evident on the first community walk in July.