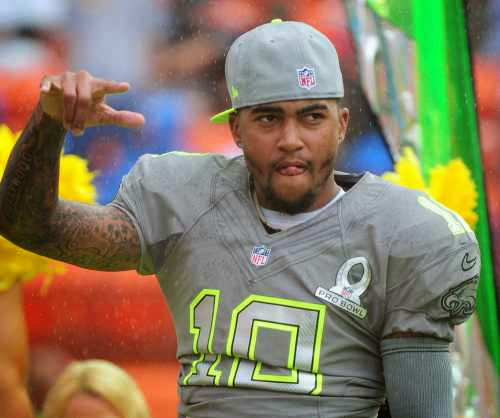 So why did former Eagles receiver DeSean Jackson issue a statement denying that he belongs to a gang?  Not long before the Eagles cut Jackson, a lengthy report emerged on NJ.com suggesting that Jackson has suspected gang ties.

Specifically, Eliot Shorr-Parks and A.J. Perez report that the Eagles were concerned about “Jackson’s continued association with reputed Los Angeles street gang members who have been connected to two homicides since 2010.”

While Jackson is a suspect in neither killing, LAPD detective Eric Crosson told NJ.com that Jackson “routinely flashes Crip gang signs in photos on social media,” and that Crosson believes Jackson did so during at least one game.

“You don’t want to see anybody throwing up gang signs like he did in the Redskins game last year,” Crosson said.  “Those were neighborhood Crip gang signs and he flashed them during a game.  He may not be affiliated with the gang, but they don’t [ordinarily] take kindly to those not in the gang throwing up those gang signs.”

It’s unclear how much the gang connection (if there is one) played in the decision to cut Jackson.  Per the report, the team also was concerned about his “bad attitude, an inconsistent work ethic, missed meetings and a lack of chemistry with head coach Chip Kelly.”

Regardless, whoever signs Jackson needs to get to the bottom of why the Eagles moved on.  And if potential gang connections were a reason, the new team needs to know what the Eagles know, and what the NFL knows.