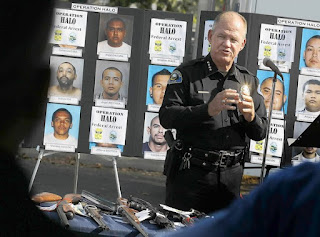 A year-long investigation into one of Anaheim's most entrenched street gangs has resulted in 33 arrests and the seizure of dozens of guns, a crackdown that comes on the heels of weeks of street protests triggered by the fatal police shootings of two men.

The investigation, dubbed Operation Halo, involved more than 250 law enforcement officers who fanned out across Orange County and parts of L.A. County as the sun was coming up Friday.


The probe was aimed at Eastside Anaheim, a gang that police said has been highly active in crime in recent years.

Manuel Diaz, a 25-year-old man who was shot by police and whose image has been plastered on protest signs, was identified as a member of Eastside Anaheim and someone who would have been targeted during the sweep, authorities said.

"If criminals realize residents are afraid of us, they exploit that," Welter said.

Anaheim has seen a significant increase in both violent crime and officer-involved shootings this year, which police have attributed to gang activity. Welter hopes the raid will cut into the violence and is a first step in "recovery" for some of Anaheim's most troubled neighborhoods.

Because of the protests and unrest in the city, authorities considered delaying the operation, but in the end they decided to carry it out.

"We can't wait until another person gets shot," Welter said.

More than 250 officers, some dressed in military fatigues, descended on 54 locations, arrested people on charges ranging from drug trafficking to homicide to unlawful possession of a firearm.

According to multiple grand jury indictments, some suspects were arrested on suspicion of distribution and possession of crystal meth. Investigators also purchased and seized dozens of weapons, including assault rifles and sawed-off shotguns, some of which were displayed at a news conference.

The multi-agency investigation was sparked in June of 2011 after a 12-year-old was stabbed and killed while walking home from school. Detectives determined the attack was linked to rival tagging crews affiliated with Eastside Anaheim, police Sgt. Bob Dunn said.

Police passed out fliers in English and Spanish in an effort to improve relations in the community, but some residents remained suspicious after the raids.

The sweep included a heavily Latino neighborhood of modest homes and apartments wedged between the 91 Freeway and an industrial area near the Anaheim city limits. On Friday, residents spent the sweltering afternoon relaxing in folding chairs in the shade as children splashed in pools and ran through sprinklers.

Hilda Vera said she was startled when police burst through her front door just after 6 a.m. with weapons drawn. She said police ransacked her room and handcuffed her and her husband's mother. The two women and Vera's 2-year-old son were alone at the time, the woman said.


"We were held hostage, with big bodyguards watching over us," said Vera, who is due to give birth later this month.

She said police were looking for her boyfriend, Daniel Villegas, 27, who was later arrested at a different location.

By Friday afternoon, workers were repairing the damaged front door. Shards of wood from the frame were found almost 15 feet away near the kitchen. There were deep ruts in the front yard from the tires of police cars.

The police, she said, confiscated two broken phones and an old computer. And they leafed through the mail.

"You would think they're here to protect you," Vera said, "and they come in here and wreck your home."

Villegas' stepfather, Ernie Lievanos, 47, was trying to get answers as to why his stepson was arrested, but he was having no luck.

"As far as I know, he's not a gang member," Lievanos said. "He lives here. He has a son. He works every day. He's into motocross. He doesn't go out gang-banging. He might know some gang-bangers, but that's no reason to knock down my door."