Schools in Session: Bullying on the Bus

Why Bullies Pick the Bus 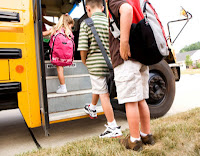 This is a very fun time of year. Students all across the country are returning to school. It should be a fun, joyous experience for every student. But for some students, there is fear and loathing. It means that they will be exposed to those that bully. As much as schools parents, and police have worked to eliminate bullying in schools there has been little done to eliminate it on the bus. As a result for bullies interested in picking on their peers, the school bus is the ideal location
Why is it an ideal location, for obvious reasons supervision is generally minimal - before boarding the bus, the hectic rush of activity makes small bullying tactics hard to notice, and while on the bus, the only adult may be the driver, who cannot react to every incident because he or she is operating the vehicle. Because the bus is a small, closed space, the targets of bullying have no place to retreat to, and they often have no choice but to ride the bus, making them easy and regular targets. This makes students vulnerable to intimidation and physical abuse on the bus. Parents, teachers and other students need to be aware of these problems and how to prevent them for the safety of everyone on the bus.
Dangers of Bus Bullying
While there is no doubt that bullying is dangerous to the student being tormented - in addition to physical harm, constant bullying tactics can damage a child's confidence, self-esteem and other personality traits - bullying is dangerous to everyone in the vehicle. Because of the close quarters, other students can easily be drawn into the action, either as additional targets or succumbing to the peer pressure to be a bully themselves. Severe bullying can distract the bus driver, increasing the risk of vehicular accidents that can severely injure students, other motorists and pedestrians. Bullying can also disrupt students' education by making them fearful of going to school and forcing them to focus on the intimation rather than learning.

Students who are being bullied may not be willing to approach adults for help because they are concerned with being labeled weak or tattle-tales. Adults can, however, can recognize signs of bullying - whether it is on the bus, on the playground or in the classroom - to help them know when children may need help. We need to educate lunch moms, adults and cafeteria staff to recognize the signs.
Bus bullying signs include:

How to React to Bullying
Current studies have indicated that nearly one in five students is subjected to school bus bullying and many parents' initial reaction may be to rush into the situation and protect their child. While this is a normal and admirable, such heroics may not help the situation because the parent cannot be present every time an incident may occur. Youth need to be given the tools to successfully navigate the potential issues as they arise. There are steps that students, parents and your school can take to prevent or stop bus bullying.
Students can…
Allow me to tell you about what my son, Bobby, did for a young girl on his school bus just at the end of the school year. Now Bobby, is by no means are large or imposing boy. However, he is very confident, funny and extremely witty. Bobby has also had to deal with several health related issues that as a result size wise make him much smaller than other boys his age. We have gone out of our way to prepare him to deal with issues of bullying and to address those issues with confidence. Now returning to this story. This young girl a neighbor and sister of our eldest daughter’s best friend had been routinely picked upon by a boy. For what reason we do not know, but he felt that he could pick on a girl that was not only smaller but could never be intimidating to a sixth grade boy. Typical profile of a bully, right? Bobby observed what the bully was doing just as they were sitting down on the bus. Bobby walks over to the young girl, gives her arm a squeeze and says, “I think she can take you Dominic, I would watch out!” The boy never said another thing to that little girl nor did he say anything to Bobby. Bobby simply went to sit down with his friends and the issue was over. We only learned about this story when the mother of the little girl told it to my wife. Because her daughter thought it was so cool that Bobby stood up for her without making a big issue of it. That is almost text book for standing up for another student who is being bullied. It’s also what every parent wants to hear about what their child has done to help another. Yes, I am proud of him!
Parents can…
Parents Getting Involved
The best way to eliminate this is to create a supportive, positive school environment that catches bullying early and makes it unacceptable behavior. Parents can support their local schools in a number of ways, such as:
To conclude
School bus bullying can make school a tumultuous experience rather than a fun opportunity for learning. Students are subjected to intimidation and abuse while riding to and from school every day. By recognizing the signs of bullying, knowing how to react to it, and getting involved to prevent bullying, both parents and students can make the school bus the first step toward a bully-free learning environment.
﻿
Email Post
Labels: 2012 Adults Bullying Bus help Parent Tips prevention School Safety Teen youth

Jaime Hecker said…
Nice article Sergeant Tornabene! That was a great story about Bobby standing up for that girl- way to go!
August 28, 2012 at 8:56 AM